Stuttgart. The Porsche Cayenne Turbo S E-Hybrid has demonstrated its exceptional range of on-road and off-road performance with a very special “record”. As part of a film shoot, the most powerful Cayenne ever clocked a hand-stopped time of 3:51 minutes around the Swedish Gotland Ring, which is still under construction and partly unasphalted. The hybrid SUV ran on used road tyres and was driven by the German racing driver and TV presenter Tim Schrick. While the 3.2-kilometre northern section of the Gotland Ring is already asphalted and in operation, the 4.2-kilometre southern section is still only gravel.

An onboard video of the lap is available on Porsche’s video portal, NewsTV, under the link https://newstv.porsche.de/en/article/131638.html for viewing, downloading and sharing.

The fuel consumption and CO2 emission values were calculated according to the new Worldwide Harmonised Light Vehicle Test Procedure (WLTP). The NEDC values derived from this must continue to be specified for the time being. These values cannot be compared with the values calculated on the basis of the previously used NEDC measuring procedure.
Communications, Sustainability and Politics
Corporate and Product Communications
Ben Weinberger
Phone: +49 (0) 711 / 911 28724
E-mail: ben.weinberger@porsche.de
Text 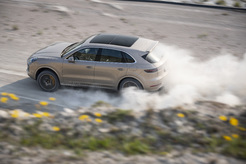 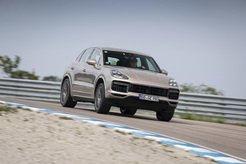 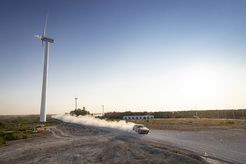