A legend celebrates its 45th birthday with renewed vigour

Great Britain. Each generation of Porsche 911 Turbo has held up the claim of being a global benchmark for high-performance sports cars. It has maintained this reputation since 1975 by continually honing a combination of exhilarating performance and everyday usability, delivering relentless power coupled with conscientious efficiency. The latest generation of the two-plus-two seater is more than twice as powerful as the original 911 Turbo, which was powered by a three-litre, single-turbocharged, 260 PS flat-six engine. As the 911 Turbo has become faster and more comfortable over the past 45 years, it has always stayed true to its original defining character – a compelling mix of pioneering spirit and tradition.

The new generation 911 Turbo Coupé and Cabriolet that are announced today sit beneath the flagship 911 Turbo S, unveiled earlier this year. With a 580 PS version of the characteristic flat-six, twin-turbo engines, the 911 Turbo offers 40 PS more than the prior generation model and consequently is able to dip under the three second 0-62 mph yardstick; specifically in 2.8 seconds (- 0.2 seconds quicker than before). This is aided by 750 Nm of low rev pull (+ 40 Nm), now without an overboost time limit, that makes quick sprints more spontaneous and effortless. In this way, the metrics for power output, acceleration and torque of the new 911 Turbo match those of the previous model 911 Turbo S.

The 3,745 cc six-cylinder flat ‘boxer’ engine in the 911 Turbo now features symmetrical VTG turbochargers with electrically controlled wastegate bypass valves. The VTG system adjusts the intake boost according to engine speed and load. Being mounted in a symmetrical layout, means the turbocharger compressor and turbine wheels now rotate in opposite directions. In conjunction with its redesigned charge air cooling system and the use of highly accurate piezo fuel injectors, these developments help improve throttle responsiveness, torque characteristics and let the engine rev more freely.

Torque is sent to all four-wheels via an eight-speed PDK gearbox with a Turbo-specific set-up; top speed remains unchanged at 199 mph where permitted. The 911 Turbo models return WLTP fuel economy of 22.6 - 23.5 mpg, equivalent to 271 – 284 g/km CO2.

The front axle offers an additional 42 mm track width versus the prior generation 911 Turbo to deliver greater steering precision, and it rolls on new 20-inch diameter 255/35 section tyres at the nose. Likewise, traction at the rear axle is further improved by a 10 mm increase in track width, supported by 315/30 tyres on 21-inch diameter wheels. Overall grip front:rear is controlled by the Porsche Traction Management active all-wheel drive system, which can now transfer higher torque values to the front axle.

The braking system has also been revised to support the broader dynamic repertoire; grey cast iron brake discs at the front now measure 408 mm in diameter (+ 28 mm) and are 36 mm wide (+2 mm). The rear axle features 30 mm wide brake discs with a diameter of 380 mm. The discs are clasped by distinctive red fixed calipers.

From the characteristic nose with its distinctive LED headlights, the shape of the 911 Turbo flows into a distinctive, muscular appearance similar to that of the 911 Turbo S. In this way, the exterior design of the new 911 Turbo follows the tradition of these powerful, rear-engined sports cars from Stuttgart, with its broad shoulders giving further emphasis to the increased driving performance.

The Porsche styling ethos of form following function is expressed in the typical Turbo rear spoiler, and here the enhanced adaptive aerodynamics of the new 911 Turbo are a particular technical highlight. This features electronically controlled cooling air flaps at the front, a larger active front spoiler and variable rear spoiler with a greater surface area. The air intakes on the rear side panels, a longstanding design feature of the 911 Turbo, now draw induction air rather than the cooling air they did before, while the charge air intercoolers are now positioned directly in the air flow under the rear lid. The continuous light bar with its LED tail lights, and the new louvred rear lid grille with silver trim strips, round off the design of the rear of the car.

The appearance and performance of the vehicle can be further emphasised by the optional Lightweight Design and Sports packages. The Lightweight Design package for the Coupé reduces overall vehicle weight by 30 kg. This is achieved with lightweight full-bucket seats, the omission of the rear seats and the fitting of less insulation, meaning that drivers also can directly enjoy the sound of the engine even more. This in turn can be further amplified with the sports exhaust system that is optionally available on the 911 Turbo for the first time.

The Sports package features the 911 Turbo Sport Design package as well as additional features in Black and in Carbon, plus Exclusive Design tail lights.

Behind the wheel of the new 911 Turbo, the basic elements of the modern interior correspond to those familiar from the 911 Carrera models, most obviously with the Porsche Advanced Cockpit and Direct Touch Control interfaces. The centre screen of the Porsche Communication Management (PCM) measures 10.9 inches, and its architecture is designed to be operated quickly and intuitively. The extensive standard equipment list includes electrically-controlled 14-way adjustable sports seats, the Sport Chrono package, a GT sports steering wheel with gearshift paddles, multifunction and mode switches and audio quality provided by a powerful BOSE® Surround Sound System. Numerous options are available for further personalisation, including Porsche InnoDrive with adaptive cruise control, Lane Keeping Assist with road sign recognition, Night Vision Assist, Surround View and the Burmester® High-End Surround Sound System. 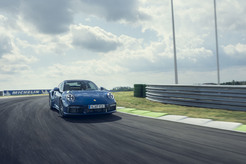 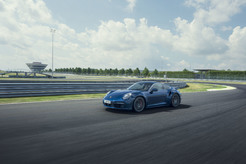 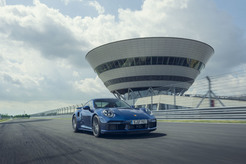 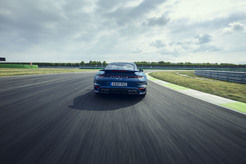 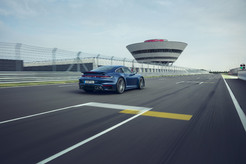 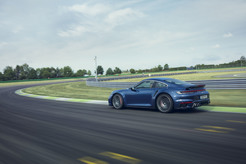 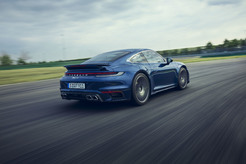 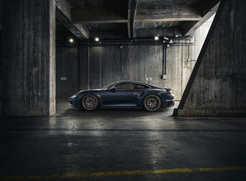 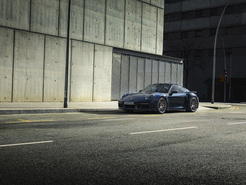 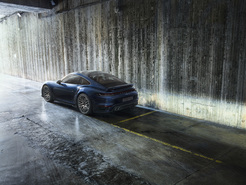 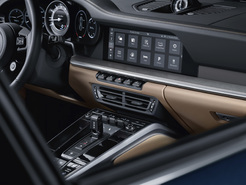 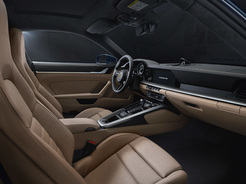