Great Britain. Since its debut in 2002, the Porsche Cayenne has set the benchmark for underlining the sport in sport utility vehicle, its combination of four-wheel drive and four doors offering outstanding chassis dynamics with versatile everyday usability. With the new Cayenne Turbo GT announced today, Porsche is celebrating the success of its SUV model range with a version tuned for maximum performance and handling. And British fans of the sports car marque will be able to see the new model make its dynamic premiere at the Goodwood Festival of Speed 8 – 11 July.

The Cayenne Turbo GT is powered by a 640 PS (471 kW) version of the proven four-litre twin-turbocharged V8 and provides the basis for the superb driving characteristics. With 90 PS (67 kW) more than the Cayenne Turbo Coupé and maximum torque of 850 Nm (an increase of 80 Nm), the 0-62 mph sprint is reduced to 3.3 seconds (-0.6 secs) and top speed where permitted is now 186 mph (+8 mph), making it the fastest production Cayenne ever to be offered by Porsche. Combined fuel consumption is 20 mpg (WLTP), equivalent to 319g/km CO2.

Available exclusively as a four-seater Coupé, the Cayenne Turbo GT features as standard a suite of dynamic chassis systems and rides on performance tyres developed specially for this model. The powertrain and suspension also have a unique specification. Overall, the result is a potent concept backed up by incredible track capability. This has been proven by Porsche test driver Lars Kern, who lapped the 12.9 miles (20.8 km) Nürburgring Nordschleife race circuit in Germany in 7:38.9 minutes, setting a new official SUV record with the Cayenne Turbo GT.

Compared to the Cayenne Turbo Coupé, the Turbo GT sits up to 17 mm lower. In addition, each chassis component and the active control systems have been re-engineered and optimised to reflect the increased handling and performance capability. The tuning has also seen specific calibration to guarantee perfect interaction between each chassis system. As an example, the rigidity of the three-chamber air suspension has been increased by up to 15 per cent, and the damper characteristics of the Porsche Active Suspension Management (PASM) have been adapted. In addition, the application of the Power Steering Plus and rear-axle steering have been fine-tuned.

Compared to the Turbo Coupé, the front wheels of the Turbo GT are an inch wider and negative camber has been increased by 0.45 degrees to give the new 22-inch Pirelli P Zero Corsa performance tyres, specially developed for the Turbo GT, a larger contact patch. The braking system has been uprated appropriately, both in terms of stopping power, fade resistance and reduced unsprung mass; the Porsche Ceramic Composite Brake (PCCB) system is fitted as standard.

The V8 fitted to the Turbo GT differs fundamentally from that in the Turbo Coupé in the crankshaft, connecting rods, pistons, timing chain drive and torsional vibration dampers. With the increase in power to 640 PS (471 kW), these components have been designed for higher peak loads and improved driving responsiveness.

The standard sports exhaust system, with its central tailpipes, is unique to the Cayenne Turbo GT. From the middle of the vehicle rearwards, the exhaust system, including the rear silencer, is made from titanium; a material that is lightweight and particularly heat resistant. An additional weight saving is achieved through the omission of the centre silencer.

Carbon styling highlights on the exterior
The Cayenne Turbo GT underlines its exceptional athleticism through its purposeful, progressive design. Highlights include a GT-specific front apron with striking spoiler lip and larger side cooling air intakes. A contoured carbon roof and black wheel arch extensions, together with 22-inch GT Design wheels in Neodyme, are distinctive features. The carbon side plates fitted to each end of the roof spoiler are GT-specific, as is the lip of the adaptive rear spoiler, which is 25 mm larger than that fitted to the regular Turbo. In combination with the extendable spoiler profile, this increases downforce at top speed by up to 40 kg. The rear stance is set apart by a striking diffuser panel made of carbon. Available as a further sporting flourish, among the palette of exterior colours is a new option of Arctic Grey.

Debut in the Turbo GT: new infotainment system for the Cayenne
The sporting character of the Cayenne Turbo GT is highlighted by the standard equipment and extended Alcantara interior trim. Eight-way adjustable front sport seats and a sport two seat system in the rear are standard. These are upholstered in GT-specific, perforated seat centre panels in Alcantara, with contrast accents in Neodyme or Arctic Grey and ‘turbo GT’ lettering on the head rests. In a subtle nod to the race circuit prowess, the multi-function sports steering wheel features a yellow 12 o’clock marking typical of Porsche sports cars. Depending on the specified trim, selected accent strips are finished in matt black.

The next-generation Porsche Communication Management (PCM) system is introduced to the Turbo GT. Featuring improved performance, a new user interface and new operating logic, the new PCM will also become standard on every Cayenne. As before, PCM 6.0 is fully compatible with Apple CarPlay, and allows for in-depth integration of Apple Music and Apple Podcasts. In addition, the infotainment system now includes Android Auto, supporting the integration of all popular smartphones.

The Cayenne Turbo GT is available to order now from Porsche Centres in the UK priced from £143,910.00 RRP. First deliveries are planned from autumn 2021.

Customers will also be invited to explore the potential of the new car, and further develop their own skills behind the wheel, by participating in a bespoke driving experience around the unique tracks at the Porsche Experience Centre, Silverstone. 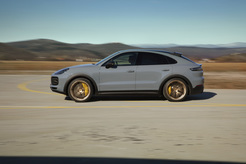 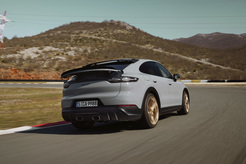 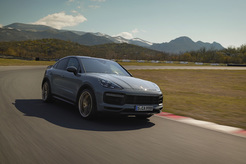 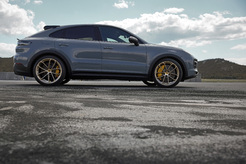 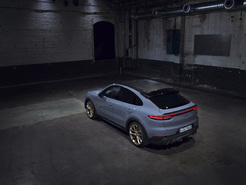 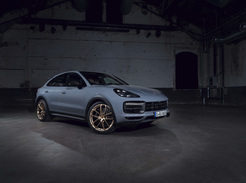 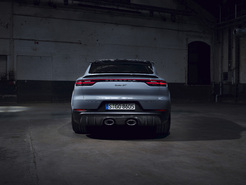 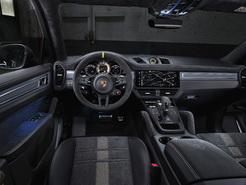