Great Britain. British motoring magazine Autocar presented its top accolade, that of Britain’s Best Driver’s Car, to the Porsche 911 GT3 at its 2022 Awards ceremony at Silverstone this evening.

It was fitting that the 911 GT3 – developed by the Porsche Motorsport department in Weissach, Germany – was honoured in such a legendary location. Silverstone is also home to the Porsche Experience Centre, which is located close by the world-famous Grand Prix racing circuit.

This is the eighth occasion the 911 has triumphed in the 30-plus years of the magazine’s annual assessment of its favourite driving cars, most recently with the prior GT3 in 2018. In fact, a 911 has triumphed in every decade of the contest and with an example of every model generation.

Launched last year, the Type 992 generation 911 GT3 is the latest model in a revered series of the rear-engined, two-door coupé that brings technology from the race circuit to the street and offers a highly athletic road car fit for high-performance driving on track balanced with the demands of everyday use.

Distinguished by a charismatic, rear-mounted, 4.0-litre flat-six engine which drives the rear wheels via a six-speed manual or seven-speed PDK double-clutch transmission, the 911 GT3 draws inspiration from the marque’s racing success to build further on the car’s driver-focused ethos.

With 11 finalists in the reckoning for the coveted title, the judging was hotly contested. In awarding the top prize to the Porsche, Autocar Editor Mark Tisshaw commented; “A 15-minute drive in the 911 GT3 would be enough to convince anyone it’s one of the most exciting cars of the modern era, if not ever – and that’s exactly what you want from the year’s best driver’s car.”

The latest 911 GT3 consistently transfers pure racing technology into a production car. The double-wishbone front axle layout and sophisticated aerodynamics with swan-neck rear wing and striking diffuser originate from the successful GT race car 911 RSR, and the 510 PS (375 kW) four-litre, six-cylinder ‘boxer’ engine is based on the drivetrain of the 911 GT3 R, tried and tested in endurance racing. The result is a brilliant driving machine: efficient and emotive, precise and high performing – perfect for the circuit and yet with characteristic everyday usability.

This duality of personality shone through in the magazine’s assessment of the GT3; “True, it feels more track-focused than before, but it’s still beautifully adjustable and super dependable, even when you’re not giving it ten-tenths.”

The distinctive strength of the 911 GT3 lies in the sum of its characteristics. Where permitted, it offers a top speed of 199 mph (198 mph with PDK). It accelerates from zero to 62 mph in 3.4 seconds. A six-speed manual transmission is offered for a particularly pure driving experience. Combined fuel economy is 21.7 - 21.9 mpg, equivalent to 294 - 292 g/km CO2.

The 911 GT3 is priced from £131,530.00 RRP and is also offered in Touring Package configuration (distinguished by the omission of the distinctive fixed rear wing and a more luxurious interior) at no extra cost. 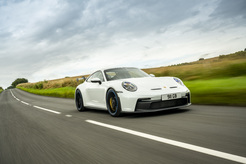 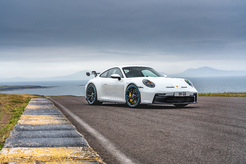