Stuttgart/Wolfsburg. Porsche Team Germany’s schedule in the lead-up to the start of the 2019 Fed Cup season against Belarus does not only include practice sessions. A welcome change for the players during preparations for the difficult first round tie in Braunschweig’s Volkswagen Halle on Saturday and Sunday was the visit to the Autostadt in Wolfsburg at the beginning of the Fed Cup week. In the Porsche Pavilion, the players Andrea Petkovic, Tatjana Maria, Mona Barthel, Laura Siegemund and Anna-Lena Grönefeld plus team captain Jens Gerlach admired the fascinating architecture of the building. Next on the program was a special photo shoot.

“It was an interesting start to the Fed Cup week with lots of things to see and do,” said team captain Jens Gerlach. “But from now on we’ll be concentrating solely on preparing for the difficult tie against Belarus. With the crowd’s support, we hope we can reach the semi-final against the strong opponents, just like last year.” 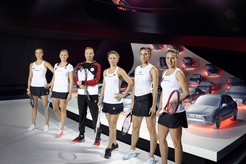 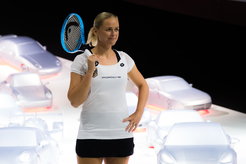